Hidden gems of the Civil War

The Civil War in Siberia was pretty much over by the end of October 1922. A few weeks later, the Far Eastern Republic was dissolved and absorbed into the RSFSR as the Far Eastern District (DVK) of the RSFSR. While there was some semi-farcical fighting around Yakutsk in 1923, nothing much happened after that.
However, the stamps of the Civil War had a surprisingly long after-life in the DVK. The DVR Monogram issue made a brief reappearance during November-December 1922 after having been invalidated by Diterikhs in August 1922, although the DVR stationery cards are seen used in 1923 as blanks. Diterikhs' PZK issue was taken out of use almost immediately after the fall of Vladivostok on 25 October 1922, but the Vladivostok Arms issue of early 1921 was used as late as April 1923 in the Vladivostok area. The Chita definitives of the FER were also introduced in the Vladivostok area in late 1922 and continued to be used all the way to 28 February 1924, when they were invalidated. During 1923 they had been joined by "D.V." surcharges in gold kopeks on RSFSR definitives, which were only used in the territory of the former Far Eastern Republic. These, too, were taken out of use after 28 February 1924. Incidentally, that issue always confused me, since there were large numbers of the Chita issue in stock...

Meanwhile, in the rest of the RSFSR, the 1922 and 1923 rubles continued to lose value and postal rates continued to skyrocket. This didn't really stop until the first of the gold currency Small Head definitives were issued in October 1923. The final months of 1923 were a fascinating period in RSFSR postal history, with 1922 rubles stamps, 1923 rubles stamps and gold currency stamps all being used to frank mail.

In the DVK this was never an issue, since the entire area had been on a gold currency basis since September 1920 (Vladivostok area) and May 1921 (rest of the FER), so the DVK adopted the Small Heads stamps without any further complications, apart from a few small adjustments in postal rates. 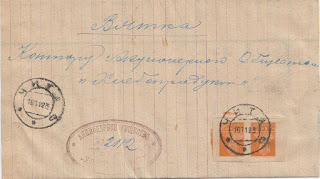 Here's an example: a November 1923 wrapper from Chita to Vyatka, franked 2x1 gold kopek in Small Heads. I've collected Siberia postal history since the late 1980s and this is the second example of Far Eastern use of the Small Heads that I've seen. A gem!

When the USSR fell apart in 1991, things got a little...loose for awhile. In the resulting chaos, some clever people with access to a decent printing shop started producing forgeries of Russian definitives, which were used quite widely on commercial mail in the mid-1990s. The 25R in particular is easy to spot with its lurid pink shade and terrible perforation, but later forgeries (of higher values) were more sophisticated.
This cover popped up on eBay recently: 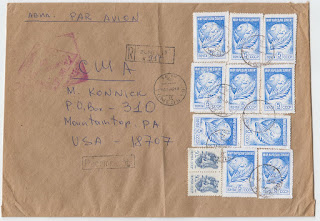 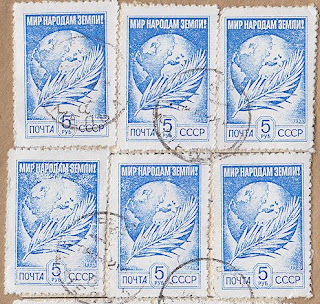 My best guess is that these were produced on a color photocopier and perforated by, um, any means available. I haven't seen it described before and this 1992 cover from Gomel' 19 is the only example I've seen. And by the way, I would love to read a good article on these postal forgeries - they are interesting and very collectable and I want to know more about them!
Posted by Dr.Ivo at 10:11 PM No comments:

Amazingly, I won't be talking about recent political events in the US.
Suppose we are confronted by a stamp issue that is not documented in official publications of any kind. And no, those goofy "certificates of authenticity" you see for several dodgy Russian Civil War issues don't count, for obvious reasons.
There might be some references to the stamps in contemporary publications, like newspapers, but I advise against looking at contemporary philatelic publications as being very useful. All too often, those publications were the victims of unscrupulous correspondents who had something to gain by an issue looking respectable, and an article in a philatelic magazine conveyed a lot of respect!

Next step: look for convincing postal usages. That may or may not be difficult or impossible. The only postal usages may have been on internal postal forms, or on items which had a minute survival rate. And even postal usages which look convincing really need expert opinion to be assessed realistically. As an example, here's a fake Nikolaevsk-na-Amur'e cover, offered on Delcampe in 2010: 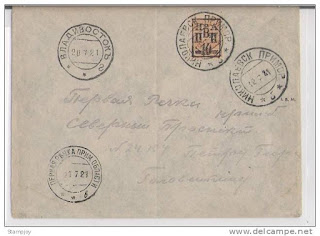 It takes a fair bit of specialist knowledge to spot the problems with this cover: it's a fake. That even alleged experts can be fooled is demonstrated by this certificate: 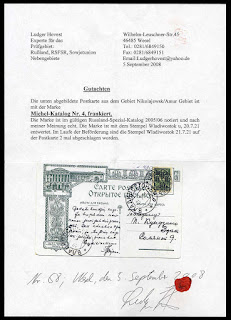 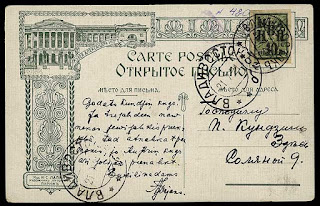 It's a silly forgery, one of the many forgeries that were circulating in Moscow during the 1990s. But it fooled this Mr. Hovest, who at one point was an accredited expert for Russia!

So do we give an issue like this the benefit of the doubt and presume its innocence?

I believe we should not. I think we should regard every even slightly questionable issue as guilty until proven innocent, and proving innocence is and should be difficult! For me, the NNA issue is still guilty...

Is there anything that makes a collector of postal history sadder than the sight of those tell-tale rectangular pale spots where a stamp used to be? Missing stamps are not just ugly, they decrease the value of a cover enormously, and they can make it difficult to understand the story behind the cover. So when I saw this cover, my heart just sank: 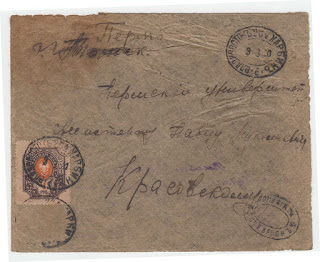 This cover was sent in March 1920 from the Vladivostok - Kharbin TPO (line 264) to Tomsk, and was sent on to Perm'. Missing stamp at lower left: almost certainly a 50k stamp since the correct rate was 1.50R for an inland letter. Tragic, isn't it? A nice TPO cover from 1920 and this happens and wait a minute......

The "To pay" mark (from the line 264 TPO no less...) tells a different story, because the amount that was entered in the center was 1r. Twice the deficiency...so the missing postage was apparently 50k. And now it's a wholly different story. The postage due exactly covers the value of the missing stamp, so the stamp falling off had happened sometime soon after the postmark was applied, and a(nother?) postman slapped on the postage due marking.

By now it is generally accepted that the "final issue" of South Russia - the 100R surcharge on perf and imperf 1k stamps - never saw use in the Crimea. While the issue made sense in light of the final postal rates of Wrangel's mini-state, distribution was prevented by the collapse of the White front lines at Perekop and the hurried evacuation of the Crimea by White forces.
The Evil Genius behind this issue (as well as the Refugee Post non-issue and probably several forgeries as well) was a gentleman called Sredinskii, and he enthusiastically marketed this "prepared for use but not issued" "issue" among stamp dealers. And postmarked copies (I won't dignify them with the description "used") do exist. Here's one: 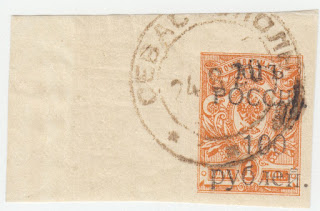 Have I seen this Sevastopol' postmark with serial letter "d" before? Yes I have! I have ONE record of another strike, a very crisp example from 1908 (from a parcel card, as it happens): 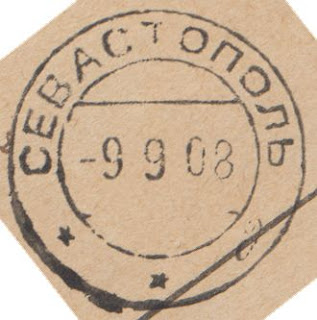 There is actually room for doubt that the two are strikes of the same postmark and the intervening 12 (at least!) years have obviously not been kind to this postmark, but for now I'll posit that these are strikes of the same postmark. But, here's where it gets interesting: I can't record a single Soviet-period strike of this postmark, and there were plenty of Soviet usages of other Imperial postmarks. So perhaps this postmark was no longer on the Crimea after 1920. Because it was in Sredinskii's pocket while he ran away to Turkey.
Frankly, even if there were a post-1920 example of this postmark from Soviet Crimea, I'd simply conclude that Sredinskii spent a productive afternoon in the Sevastopol' post office, CTO-ing the heck of a few sheets of stamps.
Bah!

Special Event postmarks of the USSR can be fun to collect, at least as far as the pre-war period is concerned. The one aspect about them that I have trouble with is that they tend to occur on blatantly philatelic covers. Ick! 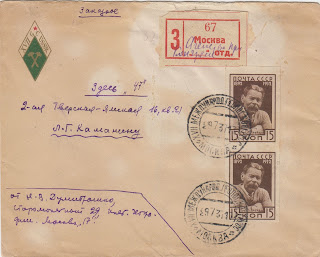 This cover is icky for another reason: the spectacularly acidic glue that was used to affix the registration label securely discolored the paper of the envelope around it. Ick! But this particular postmark is uncommon so one can be flexible...

But the best part of this envelope is the vertical pair of the 15k Gor'kii stamps: imperforate! Clearly a philatelist was at work here...
Posted by Dr.Ivo at 9:12 PM No comments: 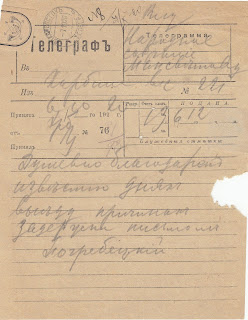 Telegraph postmarks from Vladivostok are not that scarce, since the telegraph office apparently processed quite a bit of registered mail, even during the Civil War. But complete telegrams are a different matter. This is an example from October 1920, showing the very scarce postmark with serial letter "a". Nice enough already.
The telegram was sent from Kharbin to Vladivostok, by a Mr. Pogrebetskii. And if you're a banknote collector, you know that name.
A.I. Pogrebetskii was the author of a very fine book on the monetary history of the Civil War in Siberia and the Far East. The book, published in Kharbin in 1924, gives a very detailed review of prices, banknote issues and redemptions during 1917-1923 and let me tell you, it's a complicated subject! Pogrebetskii was a dealer in banknotes in Kharbin, and it's possible he dealt in stamps as well. His book actually mentions the Civil War stamp issues of Siberia too, but it's not very detailed on that subject.
Before he became an emigre banknote dealer in Kharbin, Pogrebetskii was a politician, a member of the SR party. In fact, he was an SR member of the Far Eastern Republic parliament. The FER allowed multi-party politics and the bolsheviks, mensheviks and SR were all represented in the FER parliament. How much of a sham this was is demonstrated by the events of November 1922. With the defeat of the final White enclave in October 1922 and the withdrawal of Japanese intervention forces (except from Sakhalin), there was no longer any need for a "buffer" state in Eastern Siberia, and the FER government asked the RSFSR for permission to be absorbed. The vote in the FER parliament was unanimously in favor of this proposal....mostly because the menshevik and SR members of parliament had been arrested a few days earlier. Except Pogrebetskii, who was away in Kharbin on business at the time...

Pogrebetskii also wrote a book on Chinese banknotes and was still active as late as 1930. I can't trace what happened to him after that, but if he was still around in Kharbin in 1945 he probably met a messy end.
Posted by Dr.Ivo at 11:42 PM No comments: